The Freshwater Farms Halloween Bash is fun for the whole family. CARMa Quartet provides the music!

Peter ´Madcat´ Ruth will introduce his new band, C.A.R.Ma, we'll have birthday cake, and set up a separate room full of recently donated used CDs for Fiddle Scouts fund-raising sale. Come see your friends, have some cake, check out the recordings, and enjoy the sounds of Madcat and CARMa.

Our Summer 2021 Concert series features live outdoor music on Friday and Saturday nights, 7-10pm. All concerts are FREE. Bring your own chairs for a closer seat. No dogs and no outside food or drink please.

We are keeping it small and safe. All the protocols from last year’s plan will be in place. Temps and contact info will be requested at the gate. Expect respectfulness and kindness. We hope you will give the same to all you see. We will have some fun with it too…distancing games, fun no hugging stickers etc. There will be sanitation stations set up along your paths. Please use them. You may distance at your own comfort level. The only thing that will cause us to cancel again would be mandates from our government officials.

Weekend admission to Farmfest 2021 is $130 per person, including camping. Ages 12 and under are free. Sunday only tickets are $41. 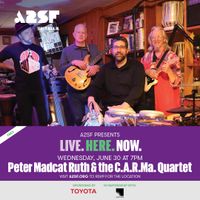 Peter Madcat Ruth has a brand new band, the C.A.R.M.a. Quartet, which plays eclectic traditional and improvisational music. Blues, American roots, folk, jazz, and world music are all part of the mix.

Peter Madcat Ruth is a Grammy Award-winning virtuoso harmonica player based out of Ann Arbor, Michigan. He has established an international reputation through his exhilarating, riveting virtuosity on the harmonica. John Churchville was a founding member of the Indian fusion group, Sumkali. Brennan Andes was a founding member of The Macpodz, and he has accompanied countless musicians from the region and beyond including Luke Winslow-King, George Bedard, Sumkali, The Ragbirds, Rootsand, Chris Bathgate, Jen Sygit, Seth Bernard, May Erlewine, Andy Adamson Quintet, Chris Good, Dick Siegal, The Tone Farmers, Vincent York, and The Pherotones. Dan Ripke toured and performed with the rock-bluegrass quintet, Back Forty, for 15 years. After Back Forty, Dan took an exploratory dive into Indian music with the band, Sumkali.